On June 11 Kate Kelly posted the formal letter from her bishop notifying her of the June 22 disciplinary council to evaluate her church membership. Unsurprisingly, in the ten days since her posting there have been a number of news articles clamoring to comment on the meaning and reaction to “dissent” in the LDS Church.The New York Times describes the LDS Church’s actions as being, “the first time since 1993, when the church ejected a handful of intellectuals known as the ‘September Six’, that it has moved so forcefully to quash such prominent and critical voices.” The Huffington Post quotes Kelly saying, “Disciplining arbitrarily and unfairly one person is not going to stop this movement.” The blogosphere too has started to ripple and Kelly has wasted no time including those reactions of support in her absentee letter to her bishopric. Kelly’s letter to her bishopric sounded off in a similar tune to Joanna Brooks memoir The Book of Mormon Girl,describing her lifelong membership in the LDS Church and framing her narrative as one of deep, intellectual questions amidst a backward church closed to ‘modern’ revelation that, if truly asked, would most certainly align itself with the goals of the group with which she presides, Ordain Women.

Kelly’s letter to her bishopric is a snapshot of her perception of the LDS church and her relationship to it. She describes herself in the ward where her disciplinary council took place as unacknowledged by the bishopric and then goes on to relate pieces of the history of her membership in the church. She describes understanding gendered inequalities as a child when she was baptized in a ‘male’ jumpsuit; she describes herself as a questioner, inspired by the Young Women value integrity; she describes her mission and her marriage in the temple, and she urges the council to consider not only her role in this organization but the some thousand people their decision will affect. The history of her membership, much like Brooks memoir, claims normalcy in the church by emphasizing a laundry list of good behavior check marks much like a resume or college application. I have no doubt that the feelings related to these life events are deep and that many of the women who participate in Ordain Women, or even empathize with the cause have true deep feelings and questions about a number of facets of church doctrine, and I do not want to minimize those questions or the feelings associated with them. However, Kate Kelly did not have a disciplinary council for asking questions; she did not have a disciplinary council for discussing questions with local and area leadership, and she certainly did not have a disciplinary council because questions are prohibited in the LDS church. 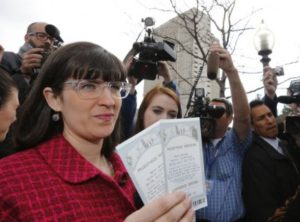 Kate Kelly had a disciplinary council because “of her activities relating to Ordain Women, for openly, repeatedly and deliberately acting in public opposition to the Church and its leaders after having been counseled not to do so, for continuing to teach as doctrine information that is not doctrine after having been counseled regarding the doctrine of the priesthood, and for leading others to do the same.” This informal probation letter was given to her on May 22, 2014 and can be seen here. Kelly’s narrative as presented on her blog, comments to the media, and in her letter to her bishopric is one in which her questions are being taken as subversive, and therefore need to be either ignored or extinguished. She describes the disciplinary council as a reaction to her questions and her excommunication as a punishment to “thousands of Mormons who have questions and concerns with gender inequality in the church and want a place to voice those concerns in safety. You are punishing anyone with a question in their heart who wants to ask that question vocally, openly and publicly.” Despite the informal letter from Kelly’s local leaders listing the actions she has taken that warrant probation and now a disciplinary council, she continues to frame the narrative as one in which her questions are the reason for reactions from local leadership. This is not only misleading but pandering for a headline by liberal media willing to paint the church as removing critical voices from its membership. The New York Times and others readily obliged.

The juxtaposition between Kelly’s local leader’s description of her relationship to church membership, and Kelly’s description of her local leader’s reactions are not the same. In fact, Kelly’s narrative is one in which members should fear asking questions because of the silent threat of church discipline under mysteriously vague circumstances. The LDS church released to two statements this week, the first described how members’ actions (not questions) can cause concern from local leaders: “Sometimes members’ actions contradict Church doctrine and lead others astray. While uncommon, some members in effect choose to take themselves out of the Church by actively teaching and publicly attempting to change doctrine to comply with their personal beliefs.” This phraseology, “choose to take themselves out of the Church,” is incredibly clear when read with the definitions of how church discipline works. Although the individual actions of members that illicit church discipline vary, there is a process, and it is not vague; it is not decided by a singular person, and it is certainly not done without attempting to counsel with the individual. Additionally, the responses of church leadership are not determined by a laundry list of actions that require specific responses. Local church leadership counsels together and prayerfully determines consequences that will aid members in returning to full fellowship.

Kelly’s changing of the narrative is indicative of how Ordain Women and its affiliates have approached their campaign to change church doctrine: by creating situations where it would appear that asking questions is equivalent with apostasy, where being denied entrance to Priesthood meetings was synonymous with inequality, and recruiting others to have/voice doubts was a matter of strength and intelligence. This is not my narrative, nor is it the narrative of the church with which I am a member.

(1) The LDS church is a church of questions, so much so that we believe in modern revelation—for me, this is the most open-ended question there is (and of any church I know); and we believe in an open canon where prophets and apostles continue to instruct and guide.

(2) The LDS church claims its lineage, like other Christians, through the Abrahamic faith, and (as Valerie Cassler notes) the Old Testament is not known for equality of women. Yet, the LDS church is the only one that I know of where salvation is an individual endeavor and the highest degree of exaltation occurs only as married couples. True to the Faith describes the relationship of the Priesthood to the family as “the most important exercise of the Priesthood” that occurs “with his wife an equal partner” (125). Dallin H. Oaks in the most recent General Conference said, “we are not accustomed to speaking of women having the authority of the priesthood in their Church callings, but what other authority can it be?” There is certainly more to be said here but it is a different topic for a different day.

(3) The LDS church is not a government entity with which we campaign for doctrine that we think would be appropriate, or convenient, or enriching. It is not an entity that changes based the number of people that protest at General Conference. It is steadfast in its doctrine and open to questions and revelation all at the same time. This tightrope is one of depth and richness, where there is consistency and change all at once. Our history is rich with examples of this, again another topic perhaps for another day.

Kate Kelly is presenting a misleading facade that is not only teaching false doctrine, but is also presenting a narrative about the LDS church that is a disservice to its members as a whole. This is not about asking questions. This is about aggressively trying to give answers for the church as a whole under the guise of equality. Pretending that actions are innocent questions without an agenda opposing LDS church doctrine is a deception that members should be quick to recognize and quick to dismiss.